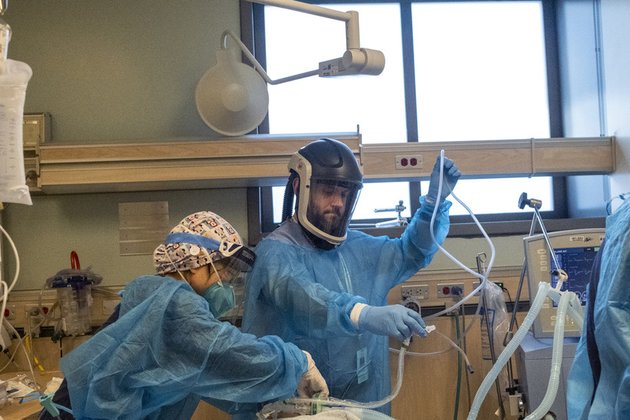 Health authorities in Utah and Minnesota have come under pressure after claims emerged that non-whites were given two extra points on a risk-based scorecard for deciding whether patients would receive Covid antibody treatment.

The lawsuit relates to the states' inclusion of race as a determining factor in whether a Covid-19 patient should be prioritized for monoclonal antibodies treatment. The medicines are currently in scarce supply.

"Using a patient's skin color or ethnicity - rather than the unique and specific medical circumstances of an individual patient - as a basis for deciding who should obtain lifesaving medical treatment is appalling," the group wrote, in letters cited by Fox News.

America First Legal argues that medical conditions such as hypertension, heart disease, or obesity, are not linked to skin color, adding that Utah and Minnesota's guidance on prioritizing non-white patients "is nothing more than an attempt to establish a racial hierarchy in the provision of life-saving medicine."

In Utah, doctors were told to use a scorecard to determine which patients are most at risk, with non-whites granted two extra points.

In a press release on Tuesday, the Utah Department of Health explained that those who were "non-white race or Hispanic/Latinx people are 35-50% more likely to be hospitalized" than white Covid sufferers.

"Each factor in the risk score represents a condition or characteristic that has been shown to put a person at elevated risk for severe disease or hospitalization," the body added.

Other factors on the scorecard include whether the patient is male, their age and whether they have co-morbidities such as cardiovascular disease.

On Wednesday, the Minnesota Department of Health removed race as a factor in rationing the medicine. Other risk factors, such as age, remain on the state's guidance.

In July, the US Food and Drug Administration said it was ethically appropriate to prioritize non-whites for Covid treatment. The scorecard system was adopted in Minnesota in December after a University of Minnesota study reinforced the notion that racial minorities are at elevated risk developing severe Covid symptoms.

RIO DE JANEIRO, Brazil: Due to the rising number of COVID-19 cases in Brazil and the spread of the Omicron ...

BERLIN, Germany: Vice Admiral Kay-Achim Schoenbach, head of the German Navy, resigned due to comments he made on Ukraine and ...

LE PECQ, France: A 75-year-old Frenchman has reportedly died during a solo attempt to row across the Atlantic Ocean. The ...

PARIS, France: Two of the largest energy companies have announced that they are leaving Myanmar, citing human rights abuses and ...

MINNEAPOLIS, Minnesota: The city of Minneapolis and its mayor are being sued by restaurant and bar owners, in response to ...

TOKYO, Japan: Toyota, the world's largest carmaker, has warned Japanese buyers of its new Land Cruiser SUV that they will ...

DALLAS, Texas: American Airlines has reported losses of $931 million in the fourth quarter of 2021. Additionally, officials have said ...

PARIS, France: European aircraft manufacturer Airbus has canceled a multi-billion dollar order by Qatar Airways for 50 of its single-aisle ...

SYDNEY, NSW, Australia - Stocks in Asia were mixed on Monday as investors fretted over this week's meeting of the ...

Toddler plays with phone, $2,000 in furniture delivered to home

HONG KONG: Crystal Cruises is suspending planned sailings of its two ocean-going ships and one expedition ship through 29th April, ...