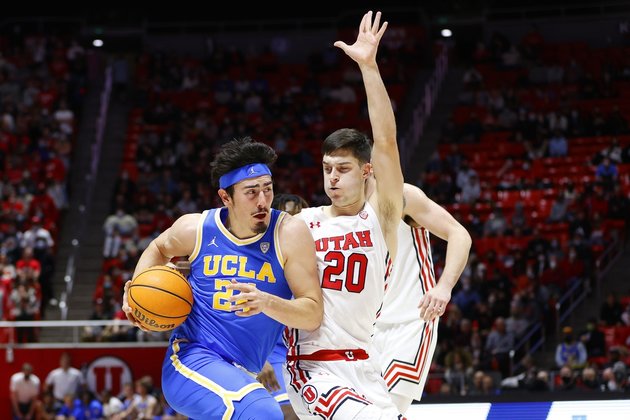 Johnny Juzang scored a season-high 28 points, and No. 9 UCLA escaped with a 63-58 win over Utah in a Pac-12 Conference matchup Thursday in Salt Lake City.

The Bruins (12-2, 4-1 Pac-12) went back-and-forth throughout the night with a Utes team that came into Thursday sitting last in the conference and on a six-game losing skid.

Jules Bernard answered on the ensuing possession with a trey for three of his 14 points. It was UCLA's only made 3-pointer of the second half, but enough to ignite a 7-0 run that proved to be the difference.

The Bruins never relinquished the lead after Tyger Campbell's turn-around jumper with 3:44 remaining, but Utah still had opportunities to score the upset down the stretch.

Gach rebounded a missed Juzang 3-point attempt with the Utes trailing by two points and led a fast break. Jaime Jaquez Jr. positioned himself to take a charge and give UCLA possession with 30 seconds left.

After Campbell made 1-of-2 free-throw attempts, Utah had one final look to force overtime, but Stefanovic's 3-pointer from the top of the key was no good.

Stefanovic led the Utes with 18 points. His 3-point shooting buoyed Utah to an 11-of-26 performance from long range, but the Utes made just 7-of-23 field-goal attempts inside the arc.

Juzang went 7-of-8 from the free throw line and Bernard shot 8-of-10 from there, and UCLA finished 22-of-29 collectively. The Bruins committed just seven turnovers.