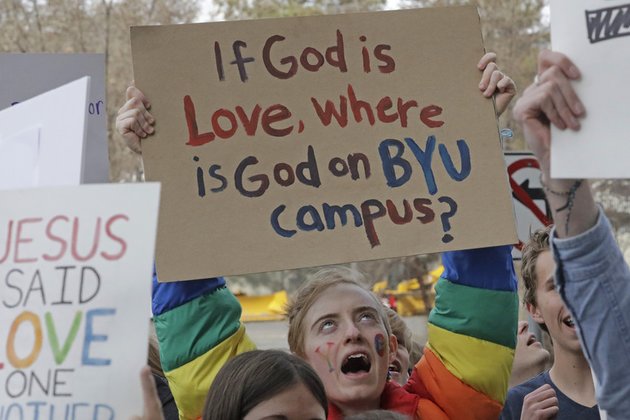 The US Department of Education is conducting a civil-rights investigation to determine whether LGBTQ students face discrimination at Brigham Young University (BYU), a Utah-based private educational institution run by the Mormon Church, formally known as the Church of Jesus Christ of Latter-day Saints.

The probe, which reportedly got underway last October, deals with 'Title IX' protections against discrimination on the basis of sex. The department's Office of Civil Rights (OCR) began investigating after receiving a complaint about the school prohibiting same-sex relationships despite striking a rule banning "homosexual behavior" from its written honor code in 2020.

According to the Salt Lake Tribune, the rule's removal had prompted some students to publicly declare their sexual orientation, but BYU then clarified that LGBTQ relationships were still banned - warning that those who held hands with or kissed members of the same sex would be disciplined.

Federal investigators waded into the matter following a number of protests by students who felt tricked into coming out, the Tribune reported. Noting that such official scrutiny was rare, the paper added that, as a private religious school, BYU is afforded certain exemptions under the Title IX law. This could mean that the OCR believes there to be "potential systemic or serious issues" at the university.

In a letter to the department in November, BYU President Kevin Worthen maintained that the school had been given protection under those exemptions and stated that students and employees had agreed to follow the honor code and "voluntarily commit to conduct their lives in accordance with the principles of the gospel of Jesus Christ."

Earlier this month, OCR Assistant Secretary for Civil Rights Catherine Lhamon responded by recognizing that the school has been afforded some religious exemptions related to religious tenets of the Mormon Church on sexual orientation and gender identity. But she added that the department was "obligated to determine" whether the complaint it received comes under those exemptions.

The new investigation appears to be about whether the exemptions permit faith-based discipline for LGBTQ students if the reason for punishment is neither related to education nor explicitly banned in its written honor code, the Tribune reported.

In a statement, BYU spokesperson Carri Jenkins said the university "does not anticipate any further action by OCR on this complaint."