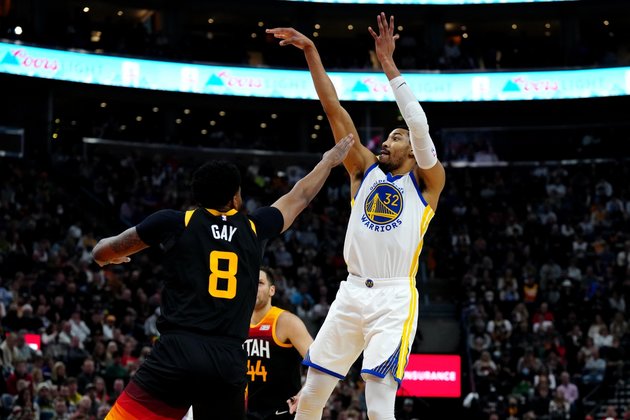 Stephen Curry will be riding the moment of one of his career highlights Sunday night when the Golden State Warriors host the Utah Jazz in a battle of Western Conference heavyweights.

The game tips off a rugged stretch for both teams as they attempt to turn things around after a rough patch of late.

Curry connected on his first career walk-off game-winner Friday night for a 105-103 home win over the Houston Rockets. The game-winner was the eighth of his career, but first with the clock having expired before the shot cleared the net.

"It's just how the game goes," Curry said. "I've hit some shots with 0.1, 0.4, one second, whatever it is. Big shots. But it's a different feeling when it's a walk-off. It's good to know what that feels like finally."

They've gone just 4-6 over that span after a 29-7 start, and now face a week in which they must deal with a tough four-game sequence book-ended by Utah and the Brooklyn Nets.

Draymond Green, an offensive catalyst with a team-high 7.4 assists per game, has missed the last seven with a disk issue in his back. He already has been ruled out through Feb. 1.

Injuries also have played a role in Utah's recent regression.

Like the Warriors, Utah is coming off a win Friday night. The Jazz ended a two-game losing streak -- one that included a home loss to the Rockets -- with a 111-101 win over the Detroit Pistons.

"We competed," he said. "One through five, everyone who came in the game, from the starters to the bench, everyone was playing with intensity. I thought we raised our level throughout the game."

The Jazz hope to have Mitchell back as early as Sunday as they prepare to duel the Warriors, the Phoenix Suns twice and the Memphis Grizzlies in the next six days.

The Warriors and Jazz met one time previously this season, with Golden State overcoming a 41-point Utah explosion in the third quarter to pull out a 123-116 road win.

Gobert had 20 points and 19 rebounds in the loss.