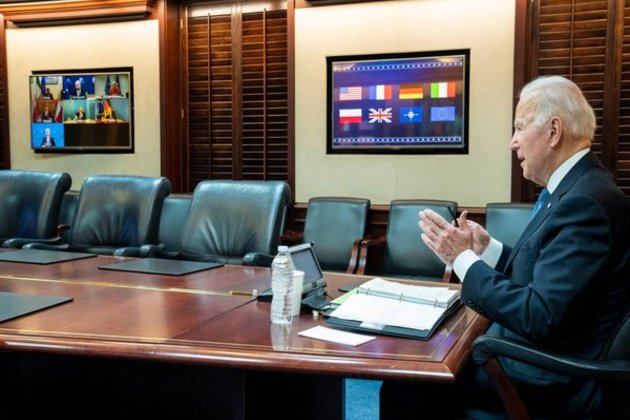 Washington [US], January 25 (ANI): US President Joe Biden said his virtual meeting with European leaders on the situation between Russia and Ukraine went very well and achieved a "total unity" among them.

Tensions between Russia and Ukraine amid a buildup of forces near their border has led to a tense situation. Discussions are underway for US involvement in the European security situation, including by supplying more military aid to Ukraine.

Russia has denied accusations that it intends to invade attack any country and has warned NATO that its activities near Russia's borders are a national security threat while Moscow reserves the right to move forces on its territory.

Biden's call with the European leaders lasted one hour and 20 minutes, during which time the parties consulted and coordinated on issues related to the ongoing situation between Russia and Ukraine.

"I had a very, very, very good meeting, total unity with all the European leaders. We'll talk about it later," Biden said during a White House event on Monday.

In a video call between Biden and European leaders, the leaders reiterated their continued concern about the Russian military build-up on Ukraine's borders and expressed their support for Ukraine's sovereignty and territorial integrity.

"The leaders underscored their shared desire for a diplomatic resolution to the current tensions and reviewed recent engagements with Russia in multiple formats," the White House said in a statement.

The leaders also discussed their joint efforts to deter further Russian aggression against Ukraine, including preparations to impose massive consequences and severe economic costs on Russia for such actions as well as to reinforce security on NATO's eastern flank.

They committed to continued close consultation with transatlantic Allies and partners, including working with and through the EU, NATO, and the OSCE.