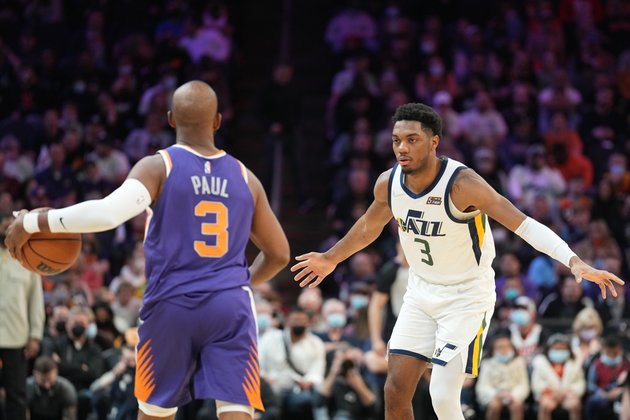 Devin Booker scored 33 points while Chris Paul added 27 points and 14 assists to lead the Phoenix Suns to a 115-109 victory over the Utah Jazz on Monday night.

Paul poured out 15 points in the fourth quarter to rally Phoenix past Utah. Bismack Biyombo chipped in 16 points and 13 rebounds off the bench. Cameron Johnson finished with 20 points. The Suns won their seventh straight game.

Jordan Clarkson scored 22 points to lead the Jazz. Trent Forrest added a career-high 17 points for Utah. It was Forrest's first career game in the NBA scoring in double figures.

Eric Paschall and Danuel House Jr. finished with 14 points apiece for the Jazz. Rudy Gay and Jared Butler each chipped in 13 points.

The Jazz lost for the eighth time in their last 10 games.

The Suns jumped on the Jazz quickly and led by as many as 13 points before halftime. Phoenix built up a 48-35 lead midway through the second quarter after Javale McGee scored on a second-chance hook shot.

Utah erased the deficit and took its first lead at 56-55 on a finger roll layup from House with 1:10 left in the first half. His basket capped a 15-5 run.

A back and forth third quarter ended in favor of the Jazz. After Landry Shamet buried a 3-pointer to put Phoenix up 85-81, Utah took the lead at quarter's end on back-to-back treys from Elijah Hughes and Butler. It sparked a 10-1 run that gave the Jazz a 91-86 lead early in the fourth quarter.