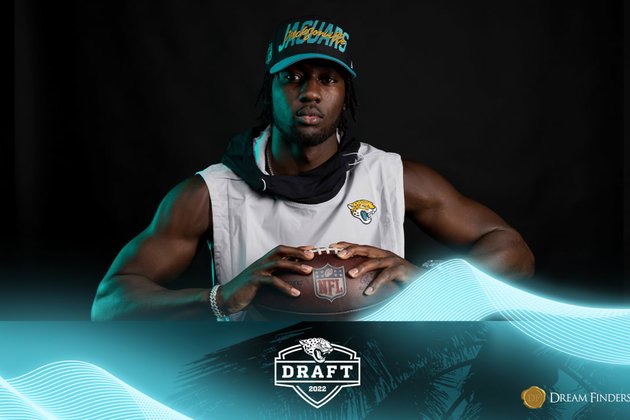 JACKSONVILLE - His strengths are many and clear - on the field and off.

When discussing Jaguars rookie linebacker Devin Lloyd, that's what University of Utah Head Coach Kyle Whittingham emphasizes. It's not just that the first-round draft selection is really good, but that he's really good in so many areas.

Whittingham, Utah's head coach since 2004, spoke to jaguars.com recently - shortly after the Jaguars selected Lloyd No. 27 overall in the 2022 NFL Draft. The Jaguars traded up from No. 33 overall for Lloyd and see him as a versatile, dynamic playmaker who will fit perfectly in Head Coach Doug Pederson's culture and defensive coordinator Mike Caldwell's multi-faceted scheme.

"He's a great person," Whittingham said. "He's obviously a great player. He was such an integral part of our team. He's one of those guys who don't come around very often. He played at the highest level on the field, gave us great leadership.

"He did things right for his entire time here at Utah."

And while Lloyd had one season of eligibility remaining at Utah, Whittingham said he absolutely made the right decision to enter the NFL Draft.

"His stock was extremely high and he had accomplished pretty much everything he set out to accomplish here at Utah," Whittingham said. "He's a guy we'd have love to have had back for another year, but that didn't make any sense."

Lloyd, a consensus All-America selection in 2021 who played at Otay Ranch (Calif.) High School, indeed was elite on the field at Utah. But Whittingham said his career was as much defined by work ethic and leadership beyond the ordinary - leadership exemplified by Lloyd's response to the death of two Utah teammates, cornerback Aaron Lowe and running back Ty Jordan, in incidents of gun violence.

Lloyd's role within the Utah program following the deaths was well-documented leading to the draft - Whittingham reiterated Lloyd's importance to his teammates, the Utah program and to the Utes turning in one of the most successful seasons in program history in 2021.

"This is not to take anything away from his play, because he's a tremendous player," Whittingham said. "But he's a terrific individual and a guy who was invaluable for us. We went through some really difficult things last year and he was in the forefront as a leader helping us get through it."

"He has a great trigger and when he triggers, he goes and gets it," Whittingham said. "He was completely ready every single Saturday and he also has great instincts. He's one of those guys who just has a nose for the ball and he's a great anticipator. When he sees something, he goes and gets it. There's no hesitation. He goes and takes."

Lloyd, the Pacific 12 Defensive Player of the Year in 2021, and a first-team All-Pac 12 selection each of the past two seasons, plays with a speed and awareness that Whittingham said stems in part from being " a student of the game in every sense of the word."

"It's a combination of athleticism and being absolutely prepared every single week," Whittingham said. "He's a self-made guy. I believe his best days are still ahead. He didn't play any linebacker in high school. He came to us as a safety and a receiver. He was a terrific basketball player.

"He started at Square One as a linebacker for us and made himself into one of the top linebackers in the country."

Whittingham said Lloyd so by spending "as much or more time in the film room than any defender we've had come through here."

"He has a great football IQ," Whittingham said. "I'd come in the building and sometimes I would be here until 9:30, 10 at night. I would go downstairs and he's in the film room by himself watching film on a Monday night or Tuesday night or Wednesday night. He came with a burning desire to be great.

"His work ethic is second to none. He was a very driven young man."