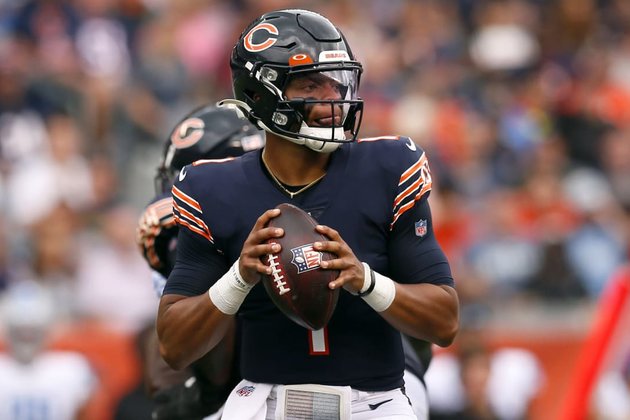 Here are five Bears players to watch in Saturday's preseason opener against the Chiefs at Soldier Field:

The development of the promising second-year quarterback is paramount to the Bears' success, so all eyes Saturday will be on Fields, who is expected to play 15-20 snaps against the Chiefs.

Entering his second NFL season as the Bears' undisputed starting quarterback, Fields has shown a greater command of the huddle and more leadership than he displayed last year in training camp when he was taking second-team reps behind veteran Andy Dalton.

The Bears anticipate that Fields will make a big leap in his second season. As a rookie, he appeared in 12 games with 10 starts, throwing for 1,870 yards with seven touchdowns, 10 interceptions and a 73.2 passer rating. He also rushed for 420 yards and two TDs on 72 carries.

One fundamental change the Bears have made with Fields this year is having him line up in the shotgun formation with his left foot forward instead of his right foot, which is what he did last season. The switch should help him get rid of the ball faster. Holding onto the ball too long was an issue at times last season and was a factor in him fumbling 12 times.

As he's gained a firmer grasp of the Bears' new offense this summer, Fields has shown steady progress on the practice field, especially in terms of his decision-making. Saturday will provide his first opportunity in a live game situation to show how far he's come and how far he still needs to go to become the player the Bears envisioned when they traded up nine spots to select him with the 11th pick in the 2021 draft.

The rookie fifth-round left tackle from Southern Utah has impressed the Bears with his athleticism and football intelligence since the day he arrived.

Jones began working with the first-team offense over the final six offseason practices and carried that momentum into training camp. Asked what he likes most about the 6-5, 310-pounder, coach Matt Eberflus said: "His ability to function in the offense and how he protects the quarterback [and] how he jumps up to the second level in our run schemes."

Jones has held his own in training camp drills against Pro Bowl pass rusher Robert Quinn, but Saturday will mark the first time the 23-year-old will be entrusted with protecting Fields' blindside against opposing pass rushers who can hit the Bears' young quarterback.

Asked what he hopes to show coaches Saturday, Jones said: "It's just huge for me to go out and do my job and play hard. I think that's the biggest thing. You might mess up here and there, but how do you rebound from a mess-up or something like that and just have a quick mindset to the next play and just give it all you've got all game?"

The only rookie listed on the Bears' unofficial depth chart as a starter on offense, Jones can help solidify that spot with the No. 1 unit with an impressive performance Saturday against Kansas City.

The rookie second-round safety from Penn State has consistently demonstrated his ball skills and instincts in training camp practices while lining up with a first-team defense that's focused on generating takeaways.

Brisker has especially shown a knack for punching the ball loose ala former Bears cornerback Charles "Peanut" Tillman, whom Brisker chatted with during the team's rookie minicamp in May. When asked what he wanted to accomplish in Saturday's preseason opener, it's no surprise that Brisker said: "Probably get a turnover immediately" before adding "just show that I know my plays and that I am still the same from practice to the game."

Eberflus has been impressed with Brisker's playmaking ability in camp.

"Some guys are fast, but they don't know how to control the body to make the plays," Eberflus said. "He has that great body control, and you can see that adjusting to the ball in the air to make an interception, adjusting to the alley when the runner changes his angle to slow down, speed up and to maintain the inside angle to run the alley and make the hit. He's done a lot of those things. You can see it."

Seeking to gain knowledge from a veteran at his position, Brisker asked Eddie Jackson if they could watch film together. The two-time Pro Bowler obliged, inviting the rookie over to his home.

"The first time I met with Eddie, he definitely just took me in right away," Brisker said. "I asked him to watch film, take me under his wing really. I'm trying to learn everything I can and just try to get that chemistry going."

Known for his physicality at Penn State, Brisker is eager to see his first live game action as a pro Saturday, saying: "[I] just want to hit someone."

The Bears are hoping that the athleticism and pass rush skills the rookie fifth-round defensive end has flashed in training camp will be evident Saturday against the Chiefs.

Robinson is a unique prospect; he arrived at Miami (Ohio) as a quarterback, switched to receiver as a freshman in 2017 and then moved to defensive end in 2020. Last season the 6-5, 253-pounder registered 28 tackles, 6.5 tackles-for-loss and 2.5 sacks while playing in 12 games.

In Saturday's preseason opener, Eberflus said that he wants to see "good technique" from Robinson.

"You've got to be coaching them on that. They understand: 'Hey, don't let that happen. Stay with your technique. Stay with your process. One play at a time. Flip the script and then just keep playing one play.'"

With several receivers sidelined by injuries, the seventh-year pro has taken advantage of expanded reps in practice and hopes to do the same Saturday versus the Chiefs. Sharpe, who signed with the Bears in May, has developed a rapport with Fields that has been evident in recent practices, most notably on Thursday when the 6-2, 194-pounder made a leaping touchdown catch.

Veteran receivers N'Keal Harry, Byron Pringle and David Moore and rookie third-round pick Velus Jones Jr. have all been sidelined with injuries and likely won't play Saturday. That should translate into more opportunities for Sharpe, who joined the Bears after spending his first six NFL seasons with the Titans (2016-19), Vikings (2020) and Falcons (2021), catching 117 passes for 1,397 yards and eight touchdowns.

"His experience shows up," Eberflus said, "his athleticism, his ability to go up and catch the ball. I'm excited to see him [play Saturday]."

Sharpe was chosen by Tennessee in the fifth round of the 2016 draft out of Massachusetts. He played in all 16 games with 10 starts as a rookie, catching 41 passes for 522 yards-both of which remain career highs.

After missing the entire 2017 season with a foot injury, Sharpe returned in 2018 and played 31 of a possible 32 games in 2018-19. He signed with the Vikings in 2020 but was waived late in the season, concluding the year on the Chiefs practice squad.

The New Jersey native signed with the Falcons last year and played in 15 games with seven starts, recording 25 receptions for 230 yards.

After sanctions, Russia says will build own aircraft, not rely on west

MOSCOW, Russia: Russia's state-owned engineering firm Rostec has said that the country's aviation industry will continue operating without the West, ...

US claims American-JetBlue alliance is anti-competitive

BOSTON, Massachusetts: The U.S. Justice Department has asked a Boston judge to force American Airlines and JetBlue Airways to scrap ...

Abortion regardless of marital status legalized by India's top court

NEW DELHI, India: In a decision widely hailed by women's rights activists, India's top court upheld the right of a ...

Another delay for US moon rocket as hurricane approaches Florida

CAPE CANAVERAL, Florida: NASA has announced that it will roll its giant moon rocket, the Space Launch System, off its ...

MIAMI, Florida: As Hurricane Ian crashes across the Caribbean, bringing high winds and torrential rains, Florida residents are scrambling to ...

KRAKOW, Poland: Organizers said an April Roger Waters concert planned in Krakow, Poland, has been canceled due to Waters' support ...

After Covid, US struggles to process Indian visa applications

WASHINGTON D.C.: U.S. Secretary of State Antony Blinken said the U.S. is working to reduce the backlog in visa applications ...

US 50 states agree to standardized connections at EV charging stations

WASHINGTON D.C.: The U.S. Department of Transportation has approved the electric vehicle charging station plans in all 50 American states, ...

BEIJING, China: During a ceremony this week, China certified its C919 narrow-body passenger jet, which is part of the country's ...

NEW YORK, New York - It was another volatile day on Wall Street on Friday as investors weighed up more ...

Asian stocks close out month and quarter on dismal note

SYDNEY, NSW, Australia - Asian stocks closed out the month and the quarter on a dismal note Friday."The 'troubling triad' ...